DELHI: Non-adherence to dual antiplatelet therapy (DAPT) -- but not DAPT discontinuation recommended by a physician -- in anemic patients who have undergone percutaneous coronary intervention (PCI) is associated with a higher risk of major adverse cardiovascular events (MACE) in the two years following the procedure. according to a recent study.

Anemia is a well-recognized risk factor for both bleeding and ischemic events after PCI. Roxana Mehran of the Icahn School of Medicine at Mount Sinai in New York City and colleagues conducted the study to determine the impact of baseline anemia on DAPT cessation patterns ≤2 years after PCI and the subsequent risk of clinical adverse events.

According to Roxana Mehran, the study underlines the importance of anemia as a consideration in the decision making for DAPT duration, adherence, and choices. "Anemia is obviously linked to bleeding, as anemic patients with acute blood loss during and around the time of PCI may require more aggressive intervention and treatment. Anemic patients were also at risk for important ischemic complications, such as myocardial infarction."

DAPT cessation modes included physician-recommended discontinuation, temporary interruption (up to two weeks), and disruption due to bleeding or nonadherence. 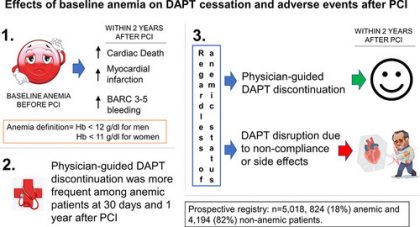 "Anemic patients should be educated on the importance of their DAPT early after stenting," Dr. Mehran said. "Also, there needs to be an evaluation for anemic patients who should be receiving a shorter duration of DAPT."