Internal jugular vein catheterization is a common practice in the intensive care unit and in operative room , for transfusion of medication, fluids, peri and postoperative CVP monitoring and management.However many complications associated with IJV catheterization have been reported such as adjoining vessels injury,pnemothorax and subclavian artery puncture which sometimes may be life threatening.

In our case 67 yr old female presented with acute inferio posterior wall MI thrombolysed with Tenectaplase outside and undewent PTCA with drug eluting stent to right coronary artery as a protocol of pharmacoinvasive therapy after 2 days of thrombolysis with good end result and was on dual antiplatelet(ticagrelor and aspirin) as per guidelines. 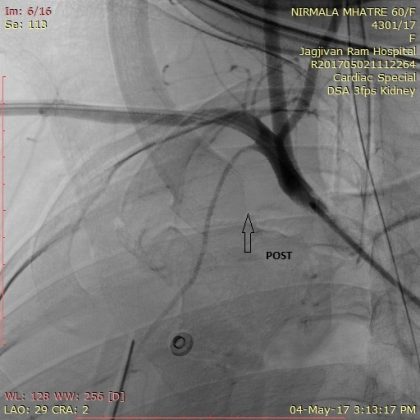 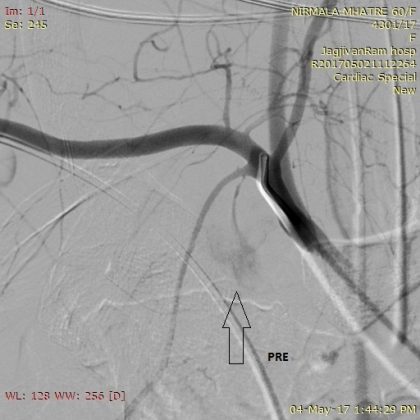 On 3rd post angioplasty she had few episodes of loss of consciousness with seizures and sweatings. .ECG and the cardiac monitor showed high degree AV block along with ventricular pause.ticagrelor was stopped and patient was taken for temporary pacemaker implantation through Right IJV approach under ultrasound guidelines. TPI through jugular vein was unsuccessful and pacing started through right femoral approach.After an hour later she was found hypotensive and dyspnoeic and bedside echo was done and pericardial effusio was ruled out however right sided pleural effusion was noted and suspected inadevtent needle injury causing perforation of subclavian vessel suspected . patient was immediatly taken for DSA which revealed subclavian (right ) artery perforation distal to ICA &RT VA. RT ICD was put immediatly and 1200 ml of blood was drained, patient was put on inotropes along with transfusion of PCV.

Since large size graft stent was not avilable immediate balloon occlusion with8 x40mm peripheral balloon for 30 mints each inflation just distal to RT ICA after confirming innomimate artery angio through left femoral artery. bleedding stopped after 4 inflations.Check angiography of rt arm shows complete sealing of perforation and low flow to distal vessels which was due to vasospasm was dealed with intrarterial infusion of nicorandil. patient improved clinically and TPI was removed and patient was switched over to clopidrogrel along with aspirin and patient was discharged after 4 days.
Take home message- To deal this complication surgical correction carries high risk of complications like injury to surrouding structures such as vessels and nevrves and patient . for endovascular approach Immediate availability of adequate sized graft stent and placement is not possible in view of proximity to RT ICA and vertebral artery in such cases prolong balloon occlusion with peripheral balloon is life saving and can aviod major complication as it happend in our case.