A unique and rare case appeared in NEJM which reported radial fracture due to parathyroid carcinoma. Taku Suzuki and Yumi Tomiie described the case of a 45-year-old man presented to the orthopaedic clinic with pain in his left forearm.

According to history, the patient had first felt the pain while gripping a railing 1 day earlier. A plain radiograph of the left arm showed a diaphyseal radial fracture (Panel A, arrow) and a diffusely low-density, mottled appearance of the radius and ulna. 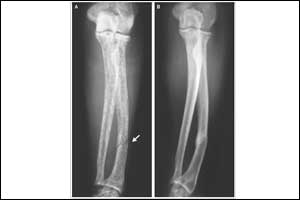 Credit -NEJM Panel A Panel B

He underwent parathyroidectomy and was found to have the parathyroid carcinoma, which is a rare cause of primary hyperparathyroidism and can manifest as markedly elevated parathyroid hormone levels. Evaluation at the time of diagnosis showed no evidence of metastatic disease. The patient’s forearm was placed in a splint for 6 weeks, and he received vitamin D and calcium supplementation.

A plain radiograph obtained 1 year after the diagnosis of the fracture showed the union of the radial fracture and normal-appearing bone density (Panel B). One year after the parathyroidectomy, the patient’s parathyroid hormone level was 48 pg per millilitre and his calcium level was 9.0 mg per deciliter (2.25 mmol per litre).

In Parathyroid carcinoma, an increase of blood parathyroid hormone concentration due to hyperparathyroidism destroys the balance of osteoblasts and osteoclasts through activation of the osteoclast which may lead to pathological fracture.