For ages now, the Diagnosis of Lymphoma has been considered a diagnosis of death. Whether its a patient or an attending physician, the diagnosis of Lymphoma brings a sense of fatality, with a fear that survival with the disease is just not possible. However, thanks to the recent advances in Medical Science, the disease is now curable, with the fear of death with disease slowly taking a form myth. Lymphoma can no longer be considered a death sentence and early diagnosis and intervention are the two main keys to get out of this death sentence.

Simply put, Lymphoma is a type of cancer involving cells of the immune system, called lymphocytes. Lymphoma can develop when there is the uncontrolled growth of lymphocytes due to genetic changes in the cells. Broadly, lymphomas comprise Hodgkin’s lymphoma (HL) and Non- Hodgkin ’s based on the pathology of blood cells. IF the pathology reveals a specific type of abnormal cell called a Reed-Sternberg cell, the lymphoma is classified as Hodgkin's, while if the Reed-Sternberg cell is not present, the lymphoma is classified as non-Hodgkin's. 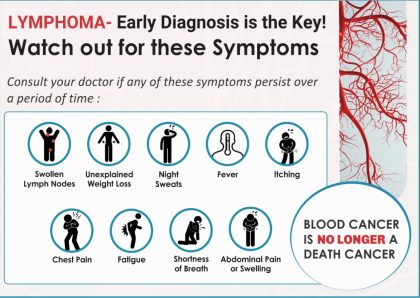 Regardless of the type, recent advancements in cancer research have not only increased the survival rates but also lowered side effects which have improved the overall quality of life of lymphoma patients. Today, Hodgkin’s Lymphoma has a cure rate of 80-90%, which is amongst the highest in cancer disorders. However, again early Diagnosis and intervention is the key

Each type of Lymphoma responds differently to a specific type of treatment. In order to provide the right treatment for the best outcome, a definitive diagnosis for the type is very important. Once the diagnosis of Lymphoma is established, the staging of Lymphoma is done usually involving PET scan, CT scan bone marrow biopsy and other blood tests. This helps to determine the extent to which lymphoma has spread in the patient’s body

While many advances have taken place in the ways of treating lymphoma, A bone marrow transplant today shines as one of the most encouraging and promising treatment procedures. In this process, blood is drawn from the patient’s body or a donor’s bone marrow. After that stem cells are harvested from the blood. This is followed by chemotherapy or radiation therapy to eliminate cancer cells. Once the deadly cancer cells are removed, reinfusion of healthy stem cells takes place into the blood. The successful transplantation restores the blood count to a safe level and cures cancer.

Prompt and Proper diagnosis for timely intervention to treat Lymphoma is a must “Lymph node biopsy is mandatory for correct diagnosis and it is a myth that lymphoma spreads by biopsy.” Remember- Every lymphoma patient needs to get an immunohistochemistry.”

The Author, Dr.Rahul Bhargava a leading Hematologist in the country and is the man behind the setting up of Integrated Lymphoma clinic at Fortis Memorial Research Centre, Gurgaon. He is currently Director of Haematology, Paediatric Haematology Oncology & Bone Marrow Transplant in Fortis Gurgaon.