Is near zero risk blood possible? by Dr R.N. Makroo

A blood transfusion service has become an integral part of modern medical practice. Most transfusions save lives, but they can also put a patient at risk if blood is contaminated by an infectious agent. Safe blood may generally be described as having no traces of viruses, parasites, drugs or any chemical substances that may cause harm to the recipient. A crucial element in ensuring safety is to know as much as possible about the source of donated blood.

Blood Safety especially in respect of viral infections HIV, HBV & HCV has improved drastically in the developed world because of voluntary non-remunerated regular blood donors, serological testing for infectious markers and incorporation of Nucleic acid testing to narrow window period donation. The overall blood supply has also improved thanks to sensitive viral screening methods, compatibility testing, leukoreduction and bacterial detection of blood components in the developed world. Recently Pathogen Inactivation of blood/ blood components by agents like psoralens and ultra-violet irradiation has been incorporated in some of the developed countries.

While no Blood Transfusion is completely safe, countries with a well-managed blood transfusion service, such as Japan, USA and Western Europe have achieved commendable levels of blood safety, yet make no claims to providing 100% Zero risk blood. The frequency of viral transmission, per unit of blood transfused in the USA, is estimated at 1 in 1.5 million for HCV, 1 in 4 lakhs for HBV and 1 in 1.8 million for HIV. Reliable nationwide figures for viral transmission are not available in India. Those getting repeated transfusions, such as patients of thalassemia or patients on renal dialysis are distinctly worse off and show high evidence of infection with HBV and HCV.

Up to 5% of HIV infections in the developing world, may still be due to transfusion of contaminated blood. Maintaining a safe blood supply, therefore, is in the interest of every public health official. There is an increase in the incidence of HIV in general population both in urban and rural areas in India. There are approximately 2.5 million HIV infected cases in India. As per NACO (National Aids Control Organization) 1.8 % of the HIV infection is attributed to blood transfusions. Since most blood donors are first time donors, the HIV prevalence in blood donors matches that in general population. India now ranks second only to South Africa for the largest number of people living with HIV/ AIDS and is predicted to rank first by 2010.

There are 30 million carriers of HBV and 10 million carriers of HCV in India. The prevalence of HBsAg positivity in blood donor population in USA and UK is about 0.1%, which is very low compared to its incidence in Indian blood donors. The Incidence of HIV, HBsAg and HCV in blood donors in India varies in different states of the country and ranges from 0.1-0.9%, 0.86-2% and 0.28-0.53% respectively. Even after the most sensitive screening tests for the detection of HBsAg in blood from blood donors. HBsAg negative units have been found to transmit the Hepatitis B virus infection.

Accordingly there is a need to frame strategies to ensure safe blood for the patient.

Voluntary non- remunerated repeats blood donor is a pivot for safe blood supply. A carefully screened voluntary donor, who answers the questions of the medical history questionnaire honestly and is non-reactive to the available screening tests, is the best defence against TAI (Transfusion Associated Infections). A system of voluntary, regular non-remunerated blood donation is widely recognized as a critical factor in quality blood service delivery. Blood donation coming from family, or replacement donors and especially paid donors are known to have a higher incidence and prevalence of transfusion-transmissible infections. Experience shows that paid donors present a higher risk of acquiring infections that can be transmitted by transfusion than those who give for purely altruistic reasons. Accordingly, an important target audience is young people, the potential low-risk donor population who need to be motivated and encouraged right from schools, universities and work to become regular blood donors. Blood coming from a voluntary system is, in general, less likely to contain the HIV, Hepatitis B, Hepatitis C or any other harmful substances. Not only is the blood likely to be safer from voluntary donors but also such a system has another advantage; it cuts down on the amount of blood that has to be discarded because of evidence of infectious disease markers in that way reducing the cost of blood transfusion services. In spite of a big human resource of over 1.3 billion of the population, there is still the shortage of voluntary blood donors in India. Although the national average of voluntary blood donation is about 75 % (NACO statistics) there is a very little concept of regular repeat blood donation, which is the hallmark of blood safety.

Infectious Markers Screening has been the most highlighted aspect of blood banking in respect of safety and accordingly, each and every unit of blood need to be tested for infectious markers by highly sensitive and specific tests. However, in spite of all the tests for infectious markers, there is no zero risk blood as none of the test available to date has been able to completely eliminate the risk of infection during the window period. The window period is the time between infection and development of antibodies/antigens. Thus, there is the risk of transfusion-transmitted infection despite serological testing due to such false negative results. Some possible reasons for false negative reports are the donation of blood during the window period, an atypical genetic variant of viruses, immunosilent cases, laboratory error due to equipment malfunction, and technical errors.

Nucleic Acid Testing (NAT) has considerably improved the blood safety in the developed countries. It has now been established that Individual Donor Nucleic Acid Testing ( ID-NAT) detect infections earlier than serological testing by reducing the window period for HIV to 3-5 days, HCV to 3.5 days and HBV to 15 days. Given the high rate of seropositivity of HIV, HCV and HBV in India and keeping in mind the high percentage of first time and replacement donors, it is likely that adding NAT to the current screening tests will have a significant impact on blood safety by the reduction in Transfusion Transmitted Infections. Screening for malaria by very sensitive methods like malarial antigen helps in the prevention of transmission of malaria in endemic countries like India. Accordingly, the malarial antigen testing needs to be implemented uniformly in all the blood banks.

There is a growing awareness that bacterial contamination plays a key part of acute post-transfusion microbial adverse events identified by the Haemovigilance program in the developed countries. Most of the bacterial transmissions are associated with platelets as these are stored at 22 ºC followed by red blood cells. The most common source being the donor skin contamination followed by the infection present in blood. Interventions to reduce bacterial risks of transfusion include enhanced cleansing of the venepuncture site, diversion of the first 15-20 ml donation to flush out skin bacteria entering the venepuncture needle, screening blood components for bacterial contamination and in the future we will have the option to use pathogen inactivation/reduction technologies to disable contaminant bacteria, especially in platelet preparations.

The use of leucodepleted blood products is gaining importance because of the scientific evidence that filtered blood products especially prestorage leucoreduction prevent or reduce the incidence and severity of a number of adverse transfusion effects like Febrile Non Haemolytic Transfusion Reaction, sensitization to blood products (HLA alloimmunization), refractive ness to platelet therapy and prevention against lymphotropic viruses including CMV . Leucoreduction is very advantageous in neonates; transplant patients and patients of leukemia and aplastic anemia. [12] Blood Safety can further be improved by decreasing the donor exposure to the patient by providing blood components from single donors i.e. platelets, plasma on cell separator or two units of red blood cells on Alyx Component System or Haemonetics MCS+. The ultimate goal of every member of the blood center team is to provide blood components of the highest available quality to patients in need. For this the blood centers have to invest extra time and money as they try to meet demand. The ALYX System produces 2 units of red cells that consistently meet both US and European compliance standards. Transfusing 2 units of red cells from the same donor helps reduce patient exposure. (Fig. 01). Hence supply of red cells can be increased with the ALYX System through targeted selection of blood groups to improve the total supply of the most critically needed red cells. 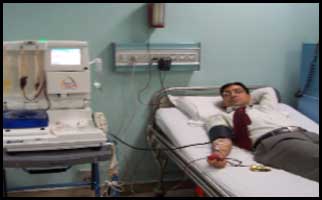 Even today, gaps exist in our defenses against the risks of blood transfusion. Pathogen Inactivation ( PI) Systems like INTERCEPT Blood System or Mirasol or Theraflex system have been developed to answer the need for a comprehensive solution to the gaps that remain with current blood safety strategy. The INTERCEPT Blood System offers the potential to inactivate new and emerging pathogens even before we realize they could be a threat to the blood supply and before tests can be developed to screen for them. It is effective against susceptible viruses, bacteria and parasites because it targets the genetic material (DNA and RNA) that is essential for their reproduction. Since all known viruses, bacteria, and parasites rely on DNA or RNA for reproduction, pathogen inactivation technology offers the potential to inactivate even those pathogens that have not yet been identified. The pathogen inactivation technology built into the INTERCEPT Blood System provides a comprehensive approach to blood safety.

Appropriate/ Rational Use of Blood

Safe blood begins with safe donors. Evidence from around the world shows that voluntary, unpaid donors are the foundation of a safe blood supply because they are the least likely to transmit potentially life-threatening infections, such as HIV and hepatitis.

To place the issue of safe blood on political agendas and highlight the role of voluntary, unpaid donors as the foundation of a safe supply, several major health organizations set 14 June as the date of the annual World Blood Donor Day. The World Health Assembly endorsed the establishment of the Day. The celebration is an important part of the strategy to promote voluntary blood donation and to reduce transfusion-transmitted infections

Since blood is a biologic product, it is unlikely that the risk for transfusion-transmitted infection will ever be reduced to zero. The approach to emerging infections associated with transfusion of blood and blood products includes assessing the transmissibility of the agent by this route; developing effective prevention strategies, including screening tests and donor deferral policies; improving viral and bacterial inactivation procedures; and surveillance for known, as well as emerging and poorly characterized, transfusion-transmitted agents. Vigilance is needed to help ensure proper balance between safety and the availability of blood.

Blood is a priceless gift but the final product costs. The yardsticks of Good Manufacturing Practices (GMPs) and Good Laboratory Practices (GLPs) in blood transfusion services keep on changing with the newer technologies and the tests introduced to ensure blood safety. Accordingly, the service charges will vary depending upon the service and consumables used which invariably would keep on escalating to meet the international standards. Thus public policies about the issues of blood safety cannot be based on pure consideration of cost-effectiveness but should take into account the ethical aspects and public perception of the risks and also the constraints from regulatory authorities. The Drugs and Cosmetics Act, which govern the blood transfusion services in India, needs to be amended on regular basis in line with the International standards.