Melioidosis is considered endemic in certain areas of the world. Musculoskeletal and soft tissue involvement is relatively uncommon presentations in melioidosis. Infective myositis secondary to melioidosis is a rare presentation that has not been reported previously.

On admission to our hospital, he had a high-grade fever, and he denied any respiratory or urinary symptoms. His bowel motions were normal with normal colour and contour. He was a farmer and had a history of exposure to surface water. He was a nonsmoker and never used alcohol. He was diagnosed for the past 8 years with type 2 diabetes mellitus, which was treated with oral hypoglycemic drugs. He was not receiving any medication other than oral hypoglycemic drugs, and he denied the recent use of steroids. He did not have any high-risk behaviours.

On examination, he was febrile (102 °F) and mildly pale but not icteric. He did not have enlarged peripheral lymph nodes or skin rashes. He had a small induration over the lateral aspect of his right upper thigh, which was tender. On further examination, lumpiness was detected deep in the indurated area, measuring 0.5 cm × 0.5 cm, which was firm and tender. Further, there was surrounding muscle tenderness. He did not have evidence of thrombophlebitis. He was hemodynamically stable, and the results of his respiratory and cardiovascular examinations were perfectly normal. His abdomen was soft, and he did not have hepatosplenomegaly. The result of his neurological examination, including bilateral fundi, was normal.

His initial full blood count showed a white blood cell count of 15,500/mm3 with 80% neutrophils. His blood picture showed normochromic, normocytic anaemia (haemoglobin 8.0 g/dl) with neutrophil leukocytosis, suggesting anaemia of chronic disease but without any evidence of bone marrow infiltration. His initial C-reactive protein (CRP) level and erythrocyte sedimentation rate (ESR) were 170 mg/L and 70 mm in the first hour, respectively, and he had an elevated serum creatine kinase level. His liver enzymes were marginally elevated with alanine transaminase of 111 U/L and aspartate transaminase of 87 U/L, but his liver and renal function were normal, and his haemoglobin A1c was 7%. His antibodies for human immunodeficiency virus types 1 and 2 were negative.

The findings of his chest x-ray, 2D echocardiogram, and an ultrasound scan of the abdomen were normal. He was started on intravenous flucloxacillin and meropenem after blood cultures and serum were taken for melioidosis antibodies. Ultrasound scan of the right lateral thigh showed a lesion that extended up to the right-side femur, but an x-ray of the right femur was normal. Contrast-enhanced computed tomography of the right thigh showed an ill-defined, heterogeneously enhancing, hypodense area in the vastus lateralis, vastus intermedius, and quadratus femoris, suggestive of infective myositis but without abscess formation. The findings of contrast-enhanced computed tomography of the chest and abdomen were normal. The patient underwent ultrasound-guided muscle biopsy, which showed coagulative necrosis in the muscle/subcutaneous tissue; infiltration with neutrophils, lymphocytes, and plasma cells in the adjacent tissue; focal suppuration; granulomata with Langhans-type giant cells; and focal fibrosis in the muscle (Fig. 1). 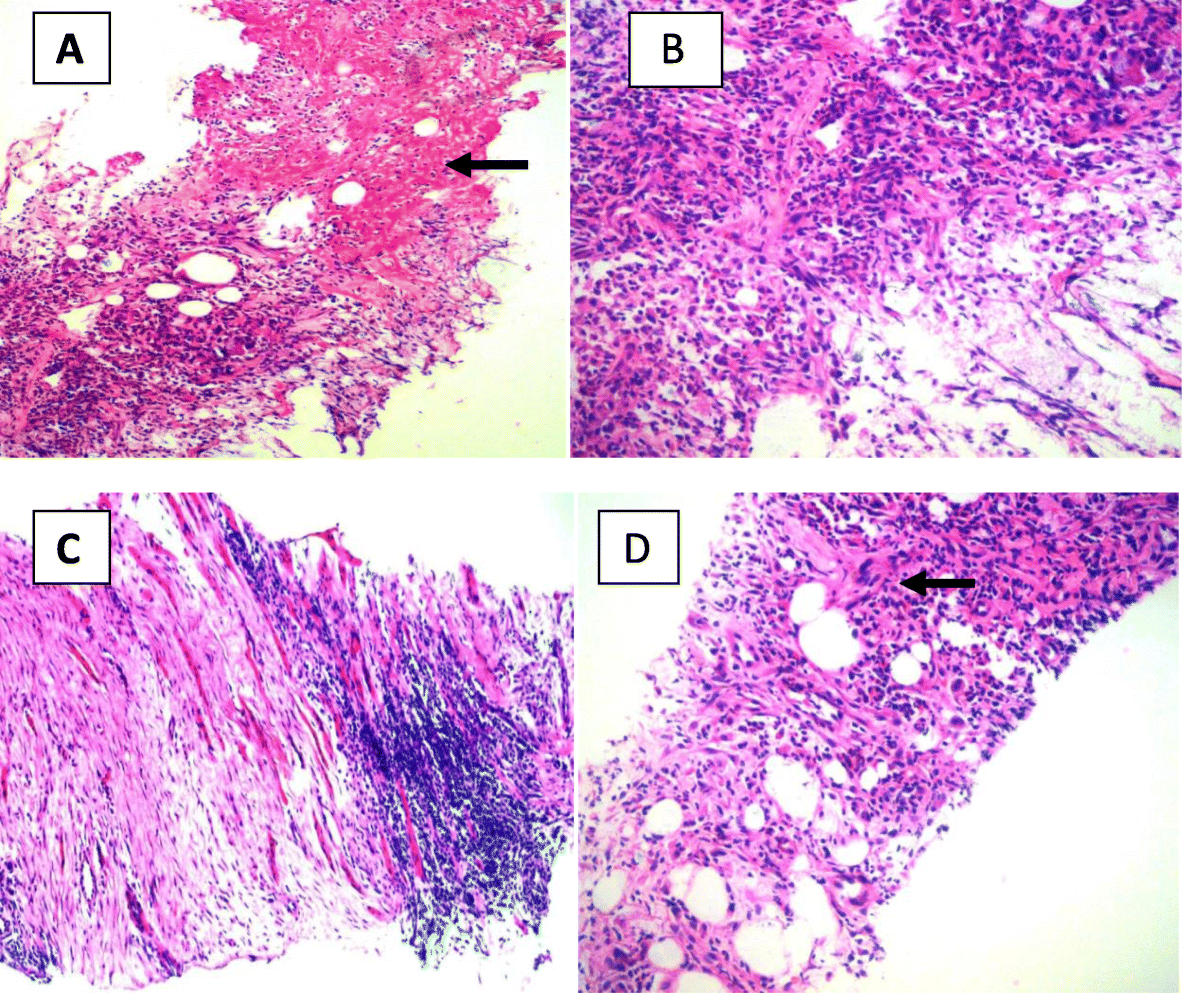 The histopathological features were suggestive of melioidosis. A muscle biopsy specimen was sent for bacterial culture and antibiotic sensitivity testing as well as culture for tuberculosis and melioidosis, and all results were negative. The results of an indirect hemagglutination assay for melioidosis antibodies were highly positive with a titer > 10,240. The patient received intravenous meropenem for 2 weeks and was started on eradication therapy with oral cotrimoxazole 960 mg 12-hourly after the intensive phase and continued for 6 months. He was clinically improving with reduced pain over the lateral aspect of the right thigh and was fever-free by day 7 of treatment. He was discharged after 14 days of treatment with meropenem. On discharge, the patient’s ESR was 40 mm in the first hour, and his CRP level was 15 mg/L. At his follow-up appointment after 2 weeks, he reported resolution of symptoms.