Holmium laser prostate surgery is a minimally invasive treatment for an enlarged prostate. Also called holmium laser enucleation of the prostate (HoLEP), the procedure uses a laser to remove tissue that is blocking urine flow through the prostate. A separate instrument is then used to cut the prostate tissue into easily removable fragments.HoLEP is similar to open prostate surgery but requires no incisions. HoLEP removes the entire portion of the prostate that can block urine flow. It can be an option to treat a severely enlarged prostate. The treatment provides a lasting solution for an enlarged prostate — a condition known as benign prostatic hyperplasia (BPH). HoLEP also preserves removed tissue so that it can be examined in the laboratory for other conditions, including prostate cancer.

Holmium lasers, 2,100nm wavelengths of Holinwon Prima, have water-absorbing properties, so the damage caused by heat is very low and the depth of tissue penetration is only 0.44mm. 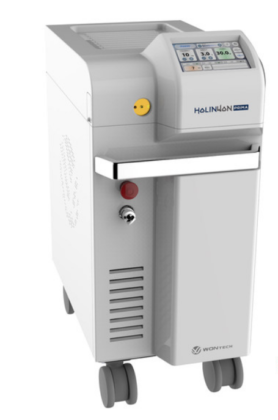 When tissue is dissected, detailed and sophisticated laser surgery is possible while minimizing damage to surrounding tissues.

Seung-woo Song, Chief of the U.S branch of WONTECH said, "We were delighted to receive FDA approval for the first time in Korea with the effectiveness and stability of WONTECH's holmium laser device. We'll make efforts to maintain constant technical innovation and will continuously improve healthcare division, which are medical devices for surgery based on our own technology."