On the eve of World TB Day on 24 March 2019, it is desired that we should take a resolve to the continuation of the joint efforts to keep elimination of TB high on the global and national agenda.

Certain facts worth remembering about tuberculosis are -


Fluoroquinolones (levofloxacin or moxifloxacin), bedaquiline and linezolid are strongly recommended for use in longer regimens, which are completed with other drugs ranked by their relative balance of effectiveness to potential toxicity. 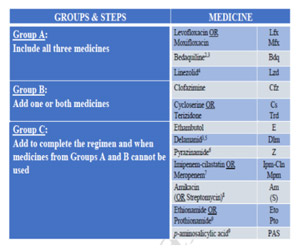 It may be reasonable to defer treatment until drug susceptibility results are available for patients who are not severely ill and can be isolated.


ROLE OF SURGERY FOR PULMONARY MDR- OR XDR-TB