The acquired immunodeficiency syndrome was first recognised in 1981, as a disease which progressively impairs cellular immunity. The etiology, human immunodeficiency virus (HIV), may be a type 1 or type 2. Type 1 is pandemic where as type 2 is restricted mainly to Western Africa (which is slowly progressive and less transmissible).

HIV is an envelope RNA retrovirus from the lentivirus family. After mucosal exposure, HIV is transported via dendritic cells to the lymph nodes, where infection becomes established. This is followed by viraemia and dissemination to lymph node organs, which are the main sites of viral replication.

As per 2015 estimates the annual number of AIDS related deaths has almost halved since the peak in 2005, and the number of new infections have decreased by 40% since 1997. This is because of combination antiretroviral therapy (ART).

HIV is transmitted by sexual contact, by exposure to blood (that is injection drug use, occupational exposure in healthcare workers) and blood products, or to infants of HIV infected mothers (who may be infected in utero, perinatally or via breastfeeding). Worldwide the major route of transmission is heterosexual.

CD4 count is the most clinically useful laboratory indicator of the degree of immunosuppression. It also helps in the decision to start prophylaxis against opportunistic infections, and is a great value in differential diagnosis of clinical problems. Once the count is less than 200 cells per mm cube, there is severe immunosuppression and high risk of AIDS defining conditions. People with high viral load experience more rapid declines in CD4 count.

Primary infection of HIV is symptomatic in more than 50% of cases but the diagnosis is often missed. The incubation period is 2 to 4 weeks after exposure. The duration of symptoms is seldom longer than 2 weeks. The presence of maculopapular rash or mucosal ulceration strongly suggest primary HIV infection rather than other viral causes of infection. Transient lymphopenia including CD4 lymphocytes is found, in most cases which may result in opportunistic infections, notably oropharyngeal candidiasis.

A prolonged ASYMPTOMATIC period of clinical latency follows primary infection, during which persistent generalized lymphadenopathy (of less than 2 cm diameter) is a common finding. The median time from infection to development of AIDS in adults is about 9 years.

Minor HIV associated disorders may develop after this stage in the form of cellular immunity impairment leading to oral candidiasis and oral hairy leukoplakia.(CDC category B or WHO stages 2 and 3).

Acquired immunodeficiency syndrome is defined by the development of specified opportunistic infections, cancers and several manifestations of HIV itself (CDC category C or WHO stage 4).

Safer sex - condom should be used for safer sex in HIV patients, which may prevent from transmission of herpes simplex virus and human herpesvirus 8. Even if their partner are HIV infected condom will prevent transmission of HIV mutants that might have developed antiretroviral drug resistance.

Avoid pets - toxoplasma gondii and cryptosporidiosis can be transmitted by animals, and HIV patients should avoid handling their litters etc.

Fluconazole: if CD4 count is below 100 cells per cubic millimetre and cryptococcal antigen is positive then fluconazole should be given as pre-emptive therapy.

INH :preventive therapy trial, showed that patients not on antiretroviral therapy, either with isoniazid or combination of Rifamycins with isoniazid reduces the risk of tuberculosis in HIV infected patients with a positive tuberculin skin test.

Immunizations: live vaccines are contraindicated in immunosuppressed patients. BCG is contraindicated in all HIV infected people. Immune response to vaccinations are impaired in HIV infected patients if the CD4 count is below 200 cells per cubic millimetre. Hence it is important to vaccinate after CD4 count becomes more than 200 cells per cubic millimetre, on antiretroviral therapy. All patients should be given the conjugate pneumococcal vaccine and annual influenza vaccine. Hepatitis B vaccination should be given to those who are not immune to it. Hepatitis A vaccine in those at risk, human papillomavirus vaccine in dose less than 40 years old, measles mumps and rubella vaccine in those with negative measles serology. Meningococcal vaccine is given in people less than 25 years old or with asplenia or complement deficiency or during outbreaks. Inactivated polio vaccine and diphtheria-tetanus - acellular pertussis vaccine, are recommended in those meeting general indications. Chickenpox vaccine for seronegative, and shingles vaccine for seropositive should be chosen.

1. Block binding of HIV to the target cell (Fusion Inhibitors and CCR 5 co-receptor blockers)
2. Block the viral RNA cleavage and one that inhibits reverse transcriptase (Reverse Transcriptase Inhibitors).
May be nucleoside (NRTIs), or non nucleoside(NNRTI).
3. Block the enzyme integrase, which helps in the proviral DNA being incorporated into the host cell chromosome (Integrase Inhibitors).
4. Block the RNA to prevent viral protein production .
5. Block enzyme protease (Protease Inhibitors).
6. Inhibit the budding of virus from host cells. 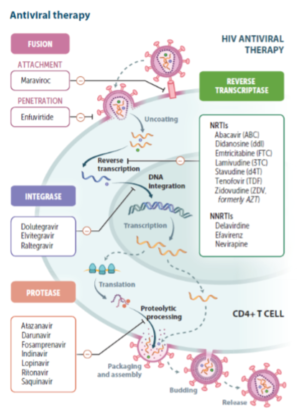 There has been a rapid decline in the HIV related mortality and morbidity due to the wider availability of affordable, more efficacious and less toxic Antiretroviral (ARV) drugs over the last two decades.

When to start ART in Adults and Adolescents: The guidelines to start ART ; CD4 count cut-off point for ART initiation was less than500 cells/cmm in 2013. But the current recommendation is to TREAT ALL, regardless of the clinical stage or CD4 count.

Antiretroviral Therapy (ART) consists of the use of a combination of at least three drugs, to inhibit the replication of HIV to undetectable levels. Hence restoration of immune response(increase in the CD4 count). This CD4 increase leads to slowing of the disease progression, reduction of opportunistic Infections, and increased longevity. And since decrease in the viral load, transmission is inhibited also.

All HIV-1 infection be initiated on a regimen consisting of TENOFOVIR (300 mg)+LAMIVUDINE(300mg)+EFAVIRENZ(600 mg) as Fixed Dose Combination in a single pill once a day.

Monitoring therapy: viral load measurement should be repeated 4 weeks after starting ART, and there should be at least at 10 fold decrease. In 6 months viral load should be suppressed. Failure of ART is defined by viral load(>1000 copies per ml- as per WHO) becoming detectable after suppression. Every six monthly viral load should be monitored. CD4 (or CD4) count increases rapidly in the first month, and in first year CD4 count typically increases by more >100 cells per millimetre cube. But if ART is stopped, the CD4 count rapidly falls to the baseline value (before ART was commenced).

While ART significantly decreases mortality, the risk of death is higher in the first six months of treatment, particularly when patients start ART with clinical stage 4 events, such as with TB meningitis, low BMI, severe immunosuppression(very low CD4 counts).

Antiretroviral therapy has transformed HIV from a progressive illness with a fatal outcome, into a chronic manageable disease (with near-normal life expectancy).