All about Dengue on International anti dengue day-Dr.Srikant Sharma

Q1: What is Anti Dengue Day?

A: June 15 is observed internationally as anti-dengue day. Idea was to increase awareness about dengue, mobilize resources for its prevention and control, and to demonstrate the Asian region's commitment towards tackling the disease. World Elder Abuse Awareness Day (WEAAD) is also commemorated on the 15th of June every year.

Q2: Does Dengue Mosquito bite only at daytime?

A: Dengue is transmitted by the bite of Aedes mosquito that attacks especially at dawn and dusk. Only female mosquitoes transmit the virus and are active in the daytime. They prefer to stay in dark places like under the table or behind screen etc. Most bites are below the knee/ below the elbow. 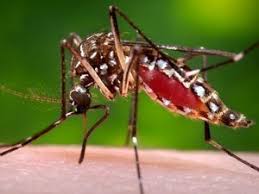 Q3: How is Dengue fever contracted?

A: Aedes mosquitoes become infected when they bite an infected human being. These mosquitoes while biting another healthy human, transmits the dengue virus, to the healthy person.

Q4: What is Dengue fever?

Q5: What is the Dengue virus?

A: Dengue virus belongs to the family Flaviviridae with single-stranded RNA. This virus has four serotypes namely (DEN 1, DEN 2, DEN 3, and DEN 4). DEN2, DEN3 are associated with a severe disease associated with severe dengue infection. DEN 5 was announced in 2013. The distinction between the serotypes is based on their antigenicity. DEN 5 was discovered during Sarawak outbreak (Malaysia) where most patients treated on an outpatient basis, hence a milder variety. DEN 5 found in South East Asia's forest and is primarily Sylvatic (Non-human primates) with small spill over to human infection. But deforestation, substandard housing, poor water storage, improper waste disposal conditions provide ideal conditions for the emerging of DEN 5 by disturbing the ecological niche.

Q6: Which geographical areas are at high risk?

A: Dengue is found where Aedes mosquitoes are present. Aedes mosquitoes are found in tropical and subtropical regions. These mosquitoes cannot fly more than 200 meters horizontally and 1000 meters vertically. But now Dengue has become a global problem and is common in > 110 countries. Each year 10,000 to 25,000 die and between 50 and 528 million people get infected and 2.5 Billion people (2/5th world population) at risk of infection. Delhi, where 10,000 cases and 400 deaths were reported in 1996, which was the first major outbreak in Delhi.

Q7: Is Dengue are notifiable disease?

A: Yes, Notifiable disease in India. The notification stipulates better case management and reduce transmission of disease. Health care providers should notify every case to the District Medical and Health Officer and the Municipal Health Officer daily. The Notification outline the definitions of probable Dengue fevers/ Dengue hemorrhagic fevers/ confirmed dengue fevers, and lay down the criteria for concluding that a patient is dengue positive. An appropriate strategy for control of mosquitoes breeding could then be devised. Dengue prone states like Maharashtra, Kerala, Tamil Nadu, Gujarat, Madhya Pradesh, and Delhi may benefit from the move if it is enforce properly. Since it's primarily, a preventable disease, hence notification may help in reducing the disease propagation, if proper and prompt action is initiated.

Q8: What effect does the Dengue virus have on the mosquitoes?

A: The Virus seems to have no detrimental effect on the mosquitoes, but mosquitoes remain infected for life. Long Aedes transmits this virus by feeding preferably human rather than other vertebrate.

Q9: What are signs and symptoms of Dengue fever?

A: If a person has fever with any 2 out of the following i.e. nausea or vomiting, skin rash, body aches/headache/ muscles pain/ joint pain or any warning signs (which are Abdominal pain, Persistent vomiting, Fluid accumulation in lung/ abdomen/ skin, Mucosal bleeding, Lethargy/ Restlessness, Liver enlargement, rapid decline in platelet count). 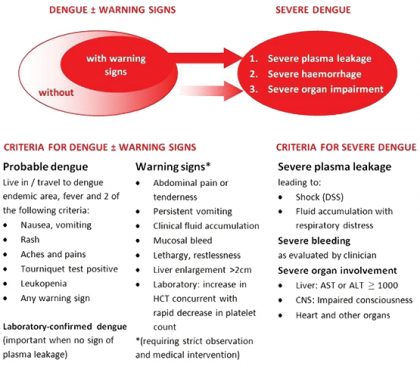 Q10: Which patients should be sent home?
A: If no warning signs as above, and patient tolerates adequate volumes of oral fluids and passes urine once in 4-6 hours, these patient don't need hospitalization.

Q11. What are phases or course of Dengue disease?

A: Dengue comes usually with 3 phases.

Followed by critical phase in which leakage of capillary (leading to fluid, lung congestion, organ congestion, shock and multi- organ failure), progressive decrease in white blood cells and platelets (may lead to bleeding). 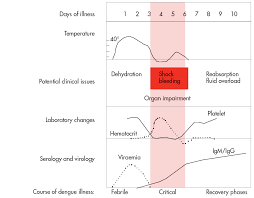 Q12. What is severe Dengue?

A: If Dengue fever is associated with any of the following

Q13: When to come back to hospital?
A: If no improvement, persistence vomiting, cold calmy, skin, restless or lethargic, bleeding, not passing urine for 4 hours.

Q14: Which patients should be more cautious?
A: Patients taking NSAIDS, Aspirin, anticoagulant therapy. Patients suffering from peptic ulcer disease, and severe trauma should also be more cautious during dengue epidemic. Pregnant women, infants, obese and patients with comorbid diseases are at high risk of dengue complications, and hence should be careful to prevent themselves.

Q15: When to Transfuse Platelets?

Massive bleed not managed by Fresh whole blood/ PRBC (Packed Red Blood Cells).
If patient is in prolonged shock with dys coagulopathy; or if platelets are < 10,000/cmm (Indian National Guidelines 2015)

RT - PCR report is possible within 24 hours. IgM & IgG start rising after 5-7 days of the disease.

Dengue NS1Ag is positive in 80% cases in first day, thereafter sensitivity decreases below 60%.

Q17. What is prognosis for Dengue?

A: Approximately 1 in every 13 patients of dengue reports to doctor. Mortality in Dengue fever is 1-2 %, in DHF (Dengue Hemorrhagic fever) is 10% and in DSS (Dengue Shock Syndrome) is 12-44% in various studies.

Death is because of low blood pressure, major bleeding or multi- organ failure. 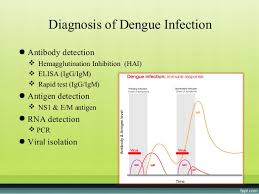 Q18: What happen, if a pregnant woman develops dengue?

A: A pregnant woman who develops dengue may be at higher risk for miscarriage, premature birth and low birth weight of the newborn.

Q19: What is the prevention from Dengue fever?

A: Prevention is by reducing mosquitos’ habitat and limiting exposures to bites:


Q20: Is there a vaccine to prevent dengue?

A: There has been recent progress in the field of vaccine development, with a live attenuated tetravalent Chimerivax vaccine available but not yet been approved for general public used in India. It’s commercially available in number of countries (like Philippines, Indonesia, Mexico, and Brazil). Dengvaxia vaccine (By Sanofi) contains all 4 DEN serotypes. It is 60% effective and prevented more than 80-90% of severe cases. Recommendation of vaccine is for those who previously had a dengue infection, and otherwise worsens subsequent infection.

Q21: After recovery from Dengue, what care a person should do?

A: Due to this disease patients immunity goes down. Hence patient should not mix with other patients who are suffering from fever, cough, active tuberculosis, infectious diseases. Follow healthy balanced diet with high protein, high red and yellow fruits, and high mineral, high dry fruits diets. They should do daily exercise (150 minutes in at least 5 divided days per week) or Yoga. Avoid pollution, smoking, alcohol. Take a good sleep, and last but not least, positive thinking which helps to modify the good immunity of the person

Q22: What are the chances of recurrence of Dengue?

A: Dengue patient will never suffer from the same DEN serotype which he suffered. Other type of DEN serotypes protection will be there for 2-3 months of primary infection. No long term cross - protection immunity is seen.

Q23: What are the dangerous rare complications of Dengue?

A: Immunological responsive agents are high in blood, after the patient recovers from dengue. When he gets another attack with other strains of dengue than previous one, then the risk of severe dengue increases. Antibody-dependent enhancement (ADE) is the accepted hypothesis. Halstead proposed ADE of infection hypothesis. Antibodies from first infection actually helps to spread the second serotype of dengue viral infections and hence increase viraemia and raises the risk of severe dengue fever. Also during second-degree infections, the cytotoxic T cells produces excess quantities of cytokines producing serious inflammation leading to capillaries leakage and severe dengue disease.

If patient has suffered from complication of dengue like encephalitis, seizures, pneumonias, cardiomyopathy, liver injury, orchitis, oophoritis etc., then their symptoms may persists even after patient recovers from dengue.

Q25: Why some people are more vulnerable to death?
A: Less than 15% of people with second time dengue develop dengue hemorrhagic fever or shock. Prof. Ravetch (molecular geneticist and immunologist) has shown that the structure of Fc region of antibodies can influence a response by, for example, promoting inflammation verses calming it. Hence serious dengue patients has had high levels of antibodies whose Fc region lack a particular sugar, a variation known to strongly activate immune cells, and hence vulnerability varies.

A: Some particular genes have been linked with increased risk of severe dengue complications. Examples include genes coding for some specific proteins, particular forms of HLA- B and G6PD deficiency (African); appears to increase risk. Polymorphism in the genes, for the Vitamin D receptor seem to offer protection against severe disease, in secondary dengue infection.

Q27: Can it affect organ donation?

A: Dengue may transmit through infected blood products and organ donation. In Singapore where dengue is endemic, the risk of transmission is 1.6 and 6 per 10,000 transfusions.

A: Different names been given to dengue in the past:

Q29: Is there any Novel methods for mosquito control?

A: Placement of guppy or Gambusia fish or copepods in standing water to eat the mosquito larvae. There are also trial with genetically modified male A.Aegyptus that after release into the wild mate with females, and render their offspring unable to fly.

Research is also going on, to infect the mosquito population with Wolbachia bacteria, which makes the mosquito partially resistant to dengue virus. But it is unclear that whether naturally infected with these are protective.