All about COPD -Dr Srikant Sharma

Dr. Srikant Sharma has shared his views on Chronic Obstructive Lung Disease, COPD on the eve of World COPD Day.

World COPD Day is organized by the Global Initiative for Chronic Obstructive Lung Disease (GOLD) in collaboration with health care professionals and patient groups throughout the world. Its aim is to raise awareness about the chronic obstructive pulmonary disease and to improve its care throughout the world.

The theme this year is “Never Too Early, Never Too Late”.

WHY COPD IS IMPORTANT?

Chronic Obstructive Pulmonary Disease (COPD) is a common, preventable and treatable disease that is characterized by persistent respiratory symptoms and airflow limitation that is due to airway and/or alveolar abnormalities usually caused by significant exposure to noxious particles or gases.

The predominant inflammatory cells in asthma include

The predominant inflammatory cells in COPD include

MANAGEMENT BASED ON GOLD 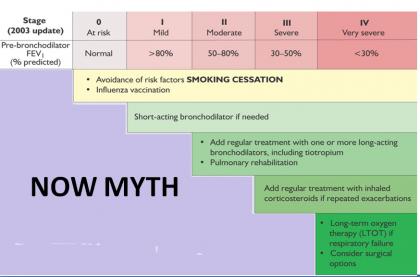 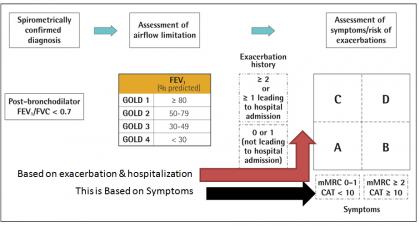 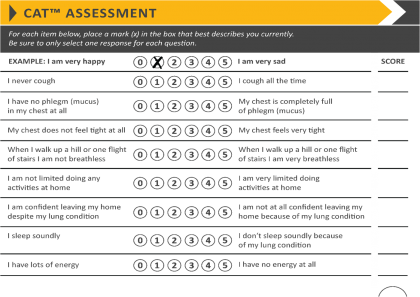 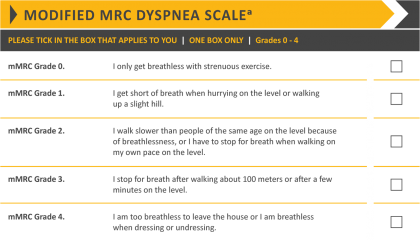 ➢Both patients with FEV1 < 30% of predicted

➢Both with CAT scores of 18

►Both would have been labelled GOLD D in the prior classification scheme.

►With the new proposed scheme, the subject with 3 exacerbations in the past year would be labelled GOLD grade 4, group D.

►The other patient, who has had no exacerbations, would be classified as GOLD grade 4, group B. 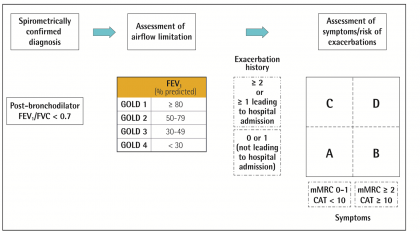 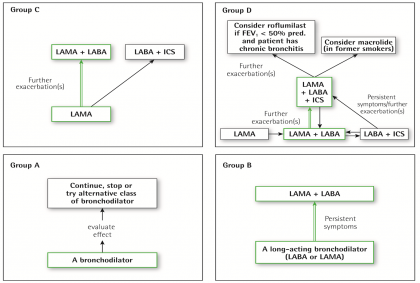 Intravenous augmentation therapy may slow down the progreassion of emphysema. (Evidence B)

There is no conclusive evidence of a beneficial role of antitussives in patients with COPD.(Evidence C)

Vasodilators do not improve outcomes and may worsen oxygenation. (Evidence B)


DISEASE TRAJECTORY OF A PATIENTS WITH COPD

►COPD exacerbations are defined as an acute worsening of respiratory symptoms that result in additional therapy.

➢Moderate (treated with SABDs plus antibiotics and/or oral corticosteroids) or

►Maintenance therapy with long-acting bronchodilators should be initiated as soon as possible before hospital discharge.

►Systemic corticosteroids can improve lung function (FEV1), oxygenation and shorten recovery time and hospitalization duration. Duration of therapy should not be more than 5-7 days.

►Antibiotics, when indicated, can shorten recovery time, reduce the risk of early relapse, treatment failure, and hospitalization duration. Duration of therapy should be 5-7 days.

►Methylxanthines are not recommended due to increased side effect profiles.

►Non-invasive mechanical ventilation should be the first mode of ventilation used in COPD patients with acute respiratory failure because it improves gas exchange, reduces work of breathing and the need for intubation, decreases hospitalization duration and improves survival. 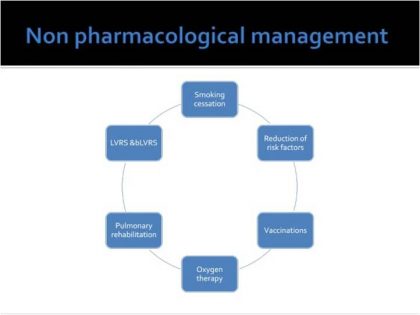 smoking cessation should be actively pursued in all COPD patients. (evidence A) 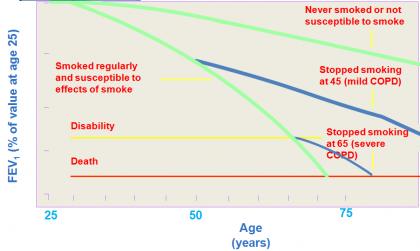 Reduction of total personal exposure to occupational dusts, fumes, and gases, and to indoor and outdoor air pollutants, should also be addressed.

Efficient ventilation, non-polluting cooking stoves and similar interventions should be recommended_ Evidence B

►Influenza vaccination can reduce serious illness (such as lower respiratory tract infections requiring hospitalization) and death in COPD patients.--Evidence B

►Pneumococcal vaccinations, PCV13 and PPSV23, are recommended for all patients ≥ 65 years of age.

►The PPSV23 has been shown to reduce the incidence of CAP in COPD patients aged <65 years of age with FEV1 <40% predicted and in those with co-morbidities. Evidence B 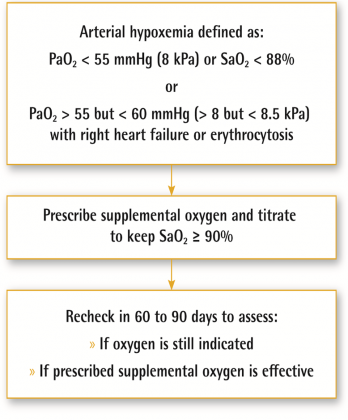 In patients with stable COPD, exercise-induced arterial desaturation, prescription of long-term oxygen does not lengthen time to death or first hospitalization or provide sustained benefit in health status, lung function and 6-minute walk distance (Evidence A).

Inpatient with severe COPD, BODE score of more than 7 and not a candidate for lung volume reduction, lung transplantation may be considered with at least one of the following :

►Co-morbidities should be treated per usual standards regardless of the presence of COPD.

►Lung cancer is frequently seen in patients with COPD and is a main cause of death.

►Cardiovascular diseases are common and important comorbidities in COPD.

►Osteoporosis and depression/anxiety are frequent, important co-morbidities in COPD, are often under-diagnosed, and are associated with poor health status and prognosis.

►Gastroesophageal Reflux (GERD) is associated with an increased risk of exacerbations and poorer health status..